Sometimes It's Not So Eazy 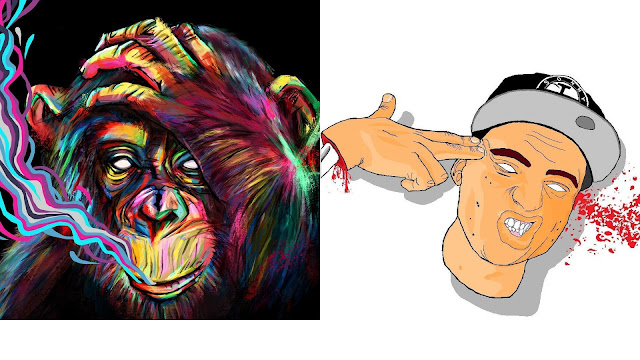 Controversy broke out this weekend in the local hip hop scene as ghostwriting allegations were brought against Calgary rapper Eazy Mac. Sketch Menace, a well known figure in the western Canadian battle rap scene, publicly called out Eazy Mac claiming unpaid writing sessions. According to Sketch, the two got together on several occasions where Eazy asked him for help with writing. After multiple instances of using his bars, Sketch claims, the two agreed to continue writing together and Sketch would receive a percentage of the Spotify streaming revenue as compensation. Things got a little shady after that when sketch never received any payment for his contribution. After the two worked out a deal for a $1000 compensation fee along with a non disclosure agreement, the final straw that ultimately culminated their fallout was disagreement between payment of taxes. In retaliation, Sketch publicly posted parts of their private conversation that showed Eazy agreeing to pay $1000 along with the non-disclosure agreement for the work that was done. 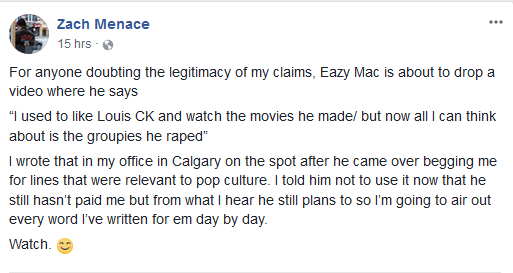 We reached out to Eazy Mac this morning by phone to get his side of the story.
According to Eazy, the two had been friends for the better part of 7 years.
"We used to hang out occasionally and smoke weed" says Eazy. "I've always admired his multis (multiple syllable rhymes) so sometimes I would throw him something like "Louis C.K" and he would come back with "Groupies He Raped" but I was the one that put it all together"
Eazy claims that there was no formal agreement between using the rhymes and the contribution that Sketch made was never more than the two bouncing ideas off each other.
"He's trying to extort me. He got really weird after I started to get a buzz. I agreed to pay the $1000 just to get him to leave me alone. I was hurt that a friend would do that to me and I was just tired of him trying to bully me so I agreed"
That $1000 turned into $1140 when Sketch asked for him to pay the BC tax rate. Although both now reside in British Columbia, Mac points out that Sketch moved to the province recently and his company would still have been registered in Alberta.
Eazy Mac provided us with the text conversations between Sketch and himself which pointed out that Mac agreed to pay the additional $140. As the conversation between the two degraded, Sketch decided that he didn't want the payment anymore and would share his side of the story publicly.
With Eazy Mac's new album about to drop, Sketch vows to call out each line that he claims to have written on the project as he did in the post above. It's hard to tell who is in the wrong, with both parties giving similar yet conflicting stories of what really happened, but if anything can be taken from this, it's to get everything in writing.

Posted by Rob Haze at Tuesday, April 17, 2018
Email ThisBlogThis!Share to TwitterShare to FacebookShare to Pinterest
Newer Posts Older Posts Home
Subscribe to: Posts (Atom)
Check out our youtube playlist below for hundreds of tracks from rappers from across British Columbia